January can be a tough time for some of us who are profoundly affected by the seasons of our planet. It has to do with ancient themes of both hibernation as well as emergence from deep withdrawal.

I love pulling on the threads of myth and old legend for symbolic answers about our environment, including the flavors and personality traits of the seasons and the months of the year.

One such thread to pull in our exploration of January meaning and symbolism is from Roman mythology. Janus, specifically. He’s the Roman god of doors, doorways, arches, openings, closings and the like. Many of you may remember Janus as the ‘two-faced’ god (or two heads, depending on your source of reference). I like this imagery very much because January is replete with paradoxes, and the prime paradox I’ve mentioned – namely, the interplay between exclusiveness and emergence.

The month of January was named after Janus for his ability to turn one face to reflect upon the past and a yet another face freshly pointed upon the future. This is so appropriate. January marks the new year for most of us humans. A new beginning.

Every beginning prompts us to thoughtfully consider past events that have accumulated to this present moment. Each of our moments stack up, one upon the other only to meet our present day, and then these moments unfold into our future. Janus, with all his hindsight and foresight opens doors of both reflection of our past and contemplation of our future.

In essence, the god Janus is kind of a bellhop or doorman for the mansions within our soul. Before us and behind us are endless doorways of potential and possibilities. Janus is privy to all of these potentials, and January proposes a perfect alignment of energies that allow the opening of all these doors so we may view the contents (insights, possibilities, reflections) inside.

I’ll take this a step further and encourage you to initiate your own meditative practice in which Janus might assist you with clarity about your potentials. Here’s an example of one such meditation I ask my meditation students to try for clarification on their own personal January meaning and symbolism:

♦  Move into your deeper, innermost concentric circles of awareness by breathing, calming and settling yourself into an alpha state.

♦  Once you’re in your space of deep, meditative suspension, visualize a revolving door – like the kind you might see at the Peabody, the Fairmont, or some other uber-posh hotel.

♦  This is a door exclusive to you, and its propulsion is prompted by Janus, your guide in this meditation.

♦  Pay close attention to this revolving door. Note the reflective glass, and the shimmery brass-work of the doorframe. Take stock of all the intricate details in your vision.

♦  In this free-fall of meditative bliss, reach out your hand and give your revolving door a spin.

♦  Round and round the door turns, the glass spinning off shards of luminous light with each revolution, the metal framework glimmers – become hypnotized by each revolution of this January door of potential.

♦  Hold a clear intention in your consciousness to either see clarity into your future, or gain perspective from your past. Keep this intention clear as you continue to become mesmerized by the rotations of your door.

♦  Now your revolving door begins to slow in its spinning, and you will begin to see one glass pane stand still in the center of your vision.

♦  At this point, (ideally) you should see reflections from your cosmic knowing within the doorway that stopped at the center of your view.

♦  Lightly contemplate the imagery dancing within the glass of the door. Or, perhaps your revolving door is wooden – see if you can discern images within the wood grain of your door. Look on with wonder at each detail within and around the door that has stopped at the center of your view.

♦  If you’re stuck, ask Janus, the god of doorways to clue you in on what you’re seeing and what it means.

♦  Always take notes about your visions once you surfaced out of your meditation. Consult your notes throughout the days ahead. Odds are the pieces come together and your meditative visions become more clear with a little concentrated contemplation each day. In time, the answersbegin to formulate.

My meditation students and I have had remarkable success at intuiting future events for the current year and determining personal January meanings with this Janus meditation.

Other Highlights for January Meaning and Symbolism 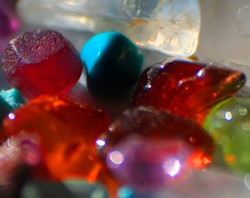 Garnet: The garnet is the a semi-precious stone whose energies govern the month of January. The term garnet comes from the Latin granatus which means “seed-like”. I dig that, especially in conjunction with the theme of January. January is all about sowing seeds (ideas, goals, new year’s resolutions, etc) and nurturing them throughout the year.

The garnet comes in many colors, but it’s most commonly admired in bright sanguine, crimsons and cheerful reds. This too is a correlation. The month of January sparks of a procession of increasing light (at least for the northern hemisphere). With each passing day after the winter solstice (in December) we begin to see the light of the sun linger longer in our views. Don garnets as a reminder of the return of the Light into your spiritual life, as well as a poignant reminder of the brilliant seeds you shall sow and see to fruition this year. I’ve written some thoughts about seed symbolism here if you’re interested 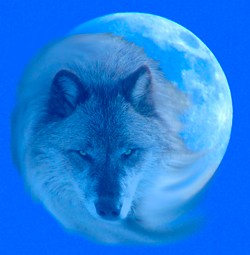 Wolf Moon: Many Native American tribes attribute natural wisdom and phenomenon to the personality of each month. This was done in a number of ways, but primarily, these nature-savvy people observed heightened activity, or key occurrences within their environment to give them a grasp on the flavor of the season or month. The Native moon for each month marked significance and predispositions for each phase of the year.

Northeastern tribes such as the Iroquois and Algonquin dubbed the month of January as the Wolf moon month (or the Cold moon month). This is because Wolves experience a high point in their behavior this time of year. In their region (northeast America and adjacent Canada), Wolves endure some of the most brutally chilling conditions of the year in January. For many wild creatures, the frigid conditions can be merciless, and maintaining their well-being is a daily struggle. Wolves, however, are an opportunistic clan, and other creatures who fall victim to winter’s clutches are easy pickin’ for a wolfy lunch. Wolves bellow their mightiest howls in January – it’s a call to the clarity of the moon, a call echoing out through the crystal ice-lands of winter, a call heralding their dominance this time of year. If the gray, cold days of January get you down, invoke the Wolf as a totem of superiority, and victory over the brittle chill. Let out a grand howl yourself, and let your rebel yell serve as notice that you are here, you are noble, and you are fully capable of conquering whatever perceived avalanche may be in your way this January. Read more about January symbolism and meaning of the Wolf Moon here (on my blog). 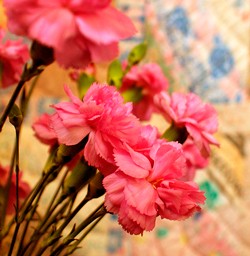 Carnation: This flower has a long symbolic history of representing remembrance, innocence, faith and tenderness. In Christian myth and legend, the carnation is sometimes referred to as “the rejoicing flower” because ancient rumor holds the carnation was first seen on earth at the time of Christ’s birth. I like this connection even more when I consider the word carnation comes from the Latin root carnis which means “flesh” (as in the flesh-color of the flower).

This ties in with the body of Christ made manifest on this planet, and births a whole realm of symbolic meanings like: Blooming consciousness, unfolding the petals of potential in this physical form, breathing new life into the world, germinating a heightened sense of love and compassion. The carnation has been around for more than 2000 years, and has been utilized to lift one’s spirits for almost as long in homeopathic/medicinal circles. Teas, tinctures, and foods have been crafted with carnations as a spice – all to enhance the mood and reduce melancholy. Give it a try yourself. If the January chill gives you the blues, snatch up a bouquet of carnations from your local florist. They are relatively inexpensive, and they are guaranteed to lift your spirits on the most gloomy winter day. Read about Carnation Zodiac symbolism here.I hope you have enjoyed these highlights regarding January meaning and symbolism. To be sure, it’s not the easiest of months to endure (at least, it’s a challenge for me), but with these soulful reminders, I trust you can keep your bearings through the snow storms of life this month, and remember the Light always shines brightest when we keep it focused in our sight. BY ~Leland B. Jacobs

National Student Athlete Day is among us!